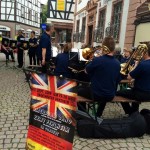 The band has just returned from a visit to Bensheim, in Germany which is a regular trip every other year. In fact the band has been travelling to Bensheim for over 30 years to help celebrate the Winzerfest wine festival and this year the band played at the formal opening ceremony, marched in the Winzerfest parade and gave several street concerts. A highlight was a joint concert with the Fehlheim wind band at Bensheim’s Parktheater. Band Chairman, Fred Harrison said “the bands really worked well together, with a joint finale comprising nearly 70 musicians. The concert was a great success and the Fehlheim band said they would very much like to visit Amersham in 2015, for a return event.”