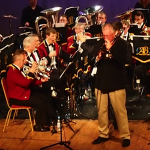 A sell-out audience of nearly 300 people had a highly entertaining evening at the Elgiva on Saturday (18 October). Amersham Band held their highlight annual Community MusicFest event, now in its fourth year, and was joined in concert by two local choirs and top trombone player Gordon Campbell. The concert opened with Beacon Voices, comprised of over 60 boys from the Beacon School and led by Liz van Tromp. Liz said “we were delighted to be part of this community show and it was a great opportunity to try out our programme in public before a trip to New York later in October.”

Next on stage was the highly accomplished Jackie Palmer Girls’ Choir. Formed just a year ago by Musical Director Sara Lawson, the choir performed a popular selection, including Gershwin’s I Got Rhythm and Fields of Gold by Sting.

The band took to the stage for the second half, together with guest soloist Gordon Campbell who is the lead trombone player with the BBC lead big band. Gordon delighted the audience with several jazz classics played with great style and wit. The band finished the set with an energetic latin-style brass arrangement “Jubilo Jubilo” which is also the title track of their newly released CD recording.

As a finale, the choirs joined the band on stage with an enthusiastic rendition of Happy by Pharrell Williams. Band Chairman, Fred Harrison said “I think we might have broken all records at the Elgiva with 90 singers and a full brass band on stage together with a capacity audience. It was a great demonstration that music is alive and thriving in our local community.”

This site uses Akismet to reduce spam. Learn how your comment data is processed.